The Stop TB Partnership today launched its World TB Day website which has the full spectrum of downloadable communications materials. World TB Day is organized each year on 24 March and aims to build awareness on TB. It is an opportunity for people everywhere to join the fight against TB, sharing information about TB and urging governments to take action. In 2017, World TB Day, under the overarching theme of ‘Unite to End TB’, is an important milestone on the road to the Global Ministerial Conference on TB in Moscow in November 2017, the UN High Level Meeting on TB in 2018 and looking further towards ending TB.

In an attempt to educate the general public in order to close the knowledge and awareness gap, the Stop TB Partnership this year will focus its efforts on communicating important but often misunderstood facts about TB which prevent people from seeking treatment or act as a barrier to efforts in reducing stigmatization of people infected and affected by the disease. Understanding such drivers of myths and misconceptions is important for improving information, education and communication efforts.

We are happy to share with you that the Stop TB Partnership’s World TB Day website has the full suite of communications products (in all six official UN languages) available for partners to download, to adapt and use for media outreach: 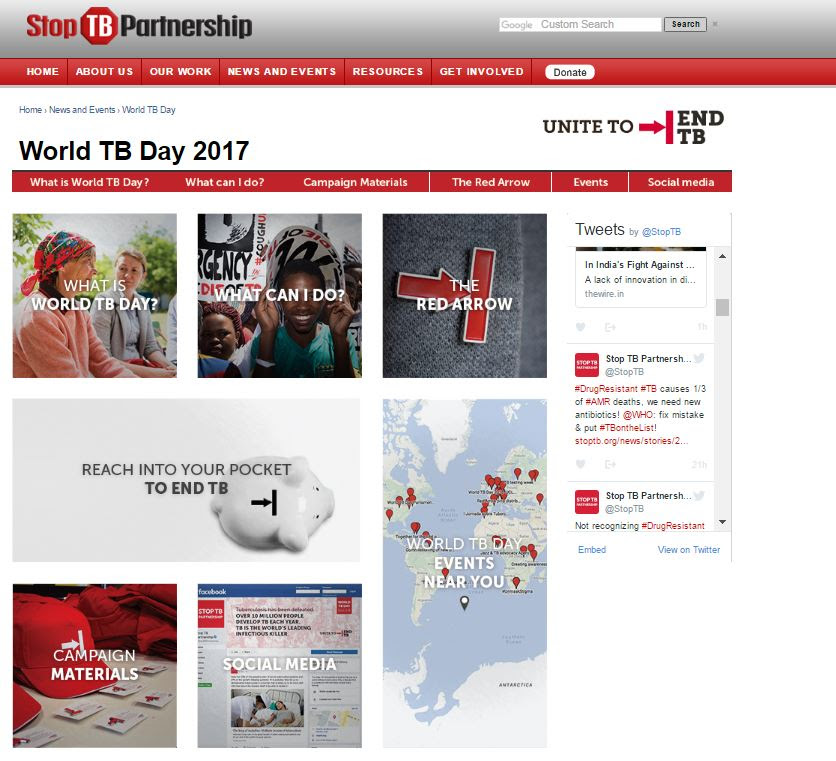 What we hope you can do:

What we are doing in Geneva:
The Stop TB Partnership, in collaboration with the Graduate Institute’s Global Health Centre is organizing the Swiss premier of the new feature-length film, ‘Lucky Specials’ which combines the best of fiction and non-fiction storytelling to demystify TB, explaining how it spreads and how it can be treated. Though dynamic characters and a captivating storyline, the film replaces misconceptions about TB with facts and shows the journey of TB bacteria inside the body through state-of-the-art animation. By making the film personal, practical and memorable, audiences will retain critical health information in a context that reflects southern African life and values. The film will screen on Friday, 24 March at 18:30 hrs at the Global Health Centre’s Auditorium Ivan Pictet B in Geneva. Entrance to the film screening is free but the Partnership welcomes donations at the door which will go towards the 2017 World TB Day Prize.
During the week of World TB Day, a series of posters will run on the screens in trams and on billboards at the Geneva Cornavin train station.
Let’s make this World TB Day a big success!