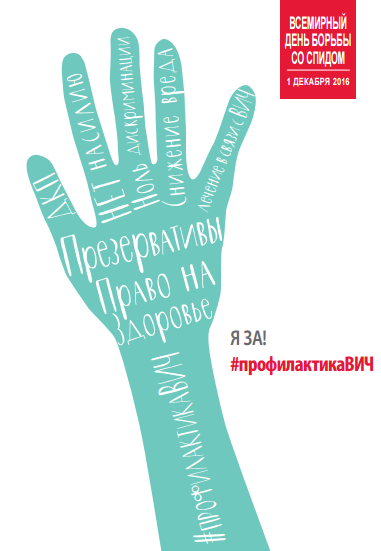 “Hands up for #HIVprevention” is the theme selected by UNAIDS to commemorate World AIDS Day on 1st December 2016. The new theme, that will be used as a part of the global strategy “Get on the Fast-Track: the life-cycle approach to HIV” to end the AIDS epidemic by 2030, echoes the UNAIDS vision of achieving “Zero new HIV infections. Zero discrimination. Zero AIDS-related deaths.”

The grant receivers were announced according to the decision of IFRC and ERNA Board Members. These National Societies work in the area of AIDS/HIV, TB and Hepatitis C, treatment and prevention, which well demonstrated the partnership and cooperation with local network of people are living with HIV and HCV. Every applied project proposal was financed with 2 500 – 5 000 CHF.

Main objectives of all activities organized by 7 National Societies from different region toward the WAD was to contribute to HIV/AIDS prevention by focusing on community based prevention activities among key population and those at risk to HIV and/or Hepatitis C with high risk. Also, to increase the communities’ awareness of HIV/AIDS and advocate for action at different levels with the involvement of drug users, MSM, CSW and prison population.

As a result, in 7 counties there were reached 16009 people as a direct beneficiaries (360 – PLHIV, MSM – 11, CSW – 36, DU – 214, Prisoners — 120), who were informed, educated, trained or tested on HIV/HCV. It is estimated that each of direct beneficiaries disseminated information to at least 3 people, so the number of people reached indirectly should be at least 48027 people.

It is important to note, that in several National Societies, as Georgian RC, Lithuanian RC, Italian RC and Latvian RC during the activities were also provided express testing on HIV and HCV for vulnerable people and general population. For instance, in Lithuania overall, 240 HIV and HCV express tests were made, and all of them were negative. While in Georgia 117 out of 364 people were diagnosed with HCV and 4 people with HIV. Kyrgyzstan RC has implemented activities on X-Ray TB examination for people who are in vulnerable groups (DUs, PLHIV and others), in total 402 people passed X-Ray examination.

More detailed information regarding the activities toward the World AIDS Day in each National Society can be found on our website.