Since the 2020 HIV targets are soon to elapse, UNAIDS is leading a three-year process to develop new targets for 2025 and to estimate the epidemiological impact and the resources needed for the HIV response from 2021 to 2030.

At the 2020 International AIDS Conference, a session chaired by Anton Pozniak, the President of the International AIDS Society, presented the process and main results from the consultations that have informed it, as well as the next steps. It is expected that the targets will inspire countries to develop ambitious national strategic plans and inform discussions in preparation for the United Nations high-level meeting on AIDS in 2021.

“This 2025 target-setting exercise sets itself apart from previous rounds of this work in that it includes a stronger focus on the need for social enablers to achieve targets for the AIDS response, as well as consideration for the integration of HIV services,” said Shannon Hader, UNAIDS Deputy Executive Director, Programme. 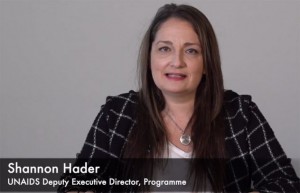 Paul De Lay, the Co-Chair of the Steering Committee of the 2025 target-setting process, highlighted that the objective is to focus on what will be needed in 2025 in order to achieve the 2030 goal of ending AIDS as a global public health threat. He stressed the broad participation and transparency of the process, which has included representation from governments, civil society, key populations, academia and others.

A representative of Avenir Health presented the model to be used in the estimation of the impact of the targets. The model includes data on population sizes, the estimated impact of each service included and the effectiveness and sustainability of the interventions.

The session heard presentations from the three co-chairs of the technical consultations on testing and treatment, primary prevention and addressing social enablers.

Wafa El-Sadr, from ICAP at Columbia University, said that according to the results of the technical consultation on testing and treatment, in order to leave no one behind the targets should be the same for all subpopulations, including key populations. There should also be specific targets for men and women adjusted by age group and specifically for children younger than 13 years of age. Pregnant women should have testing and treatment targets higher than 95%.

On primary prevention, Quarraisha Abdool Karim, from the Centre for the AIDS Programme of Research in South Africa, indicated that, globally, new HIV infections have declined, but the rate of the decline was far too slow to reach the 2020 target. HIV prevention requires a context-specific combination approach that includes behaviour, biomedicine and an enabling environment for service access and uptake, and the set of targets for 2025 should call for countries to address structural barriers to services. According to her, most parts of the world are not living up to their commitments to scale up primary prevention services, and so the 2025 targets must include a strong statement on HIV prevention.

On social enablers, the session heard that the response to HIV must be people-centred and be based on the principle of inclusion and participation, highlighting the need for community-led responses.

The target-setting process will feed into the new UNAIDS global AIDS strategy currently being developed.

Partners Of The Network